The Shield is a type of Weapon in Babylon's Fall. Unlike other weapons with offensive capabilities, shields are used exclusively to protect from attacks and projectiles. Each shield has a varying set of stats and parameters such as Attack, Damage Type, Critical Hit Rate and may contain special properties or provide certain effects. This page lists all available Shields in Babylon's Fall and details various information including how to acquire them.

All Weapon Types in Babylon's Fall:

The Shield is a purely defensive weapon. While you cannot attack with it, the Shield boasts superior defense and allows the player to block and parry attacks from enemies. 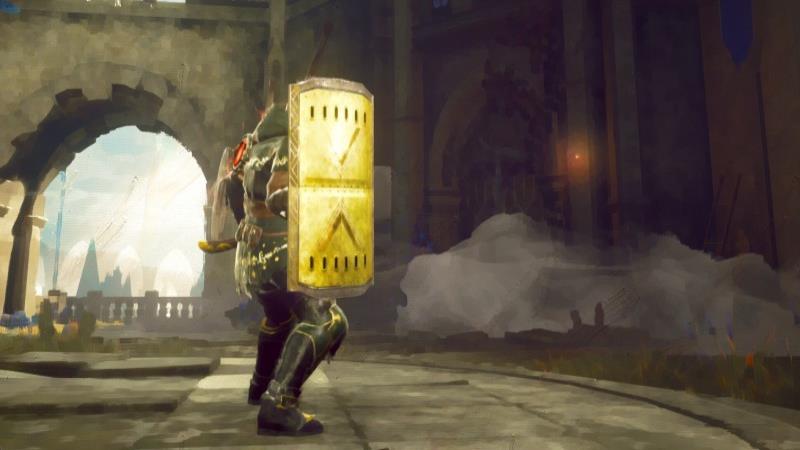 Players will have access to 4 Weapon Slots represented by the X, Y, LB and RB buttons on the Gamepad. Each button also corresponds to a different action for the equipped weapon: Speed Attack (X Button), Heavy Attack (Y Button) and Gideon Arms (LB Button, RB Button).

Each Weapon has 3 Attack Modes that can be freely switched outside of combat. Each mode offers a variety of attacks and unique effects and experimenting with different modes plays a large part in Combat effectiveness.

The game's fundamental Attack Mode, built around combo attacks.
Note that the shield can only be used in Vulcan Mode.

Equipment with high rarity may come with Added Effects which are either passive bonuses, temporary or conditional buffs such as improving critical hit rate after landing a finishing blow. You can gain an edge in battle by combining the various added effects from your weapons and armor.

All Shield Weapons in Babylon's Fall

There is a wide variety of Shield Weapons available in Babylon's Fall. Shields can be obtained through Crafting, found as random loot in chests and containers, as random drops by Enemies and Bosses or as rewards for completing Quests.